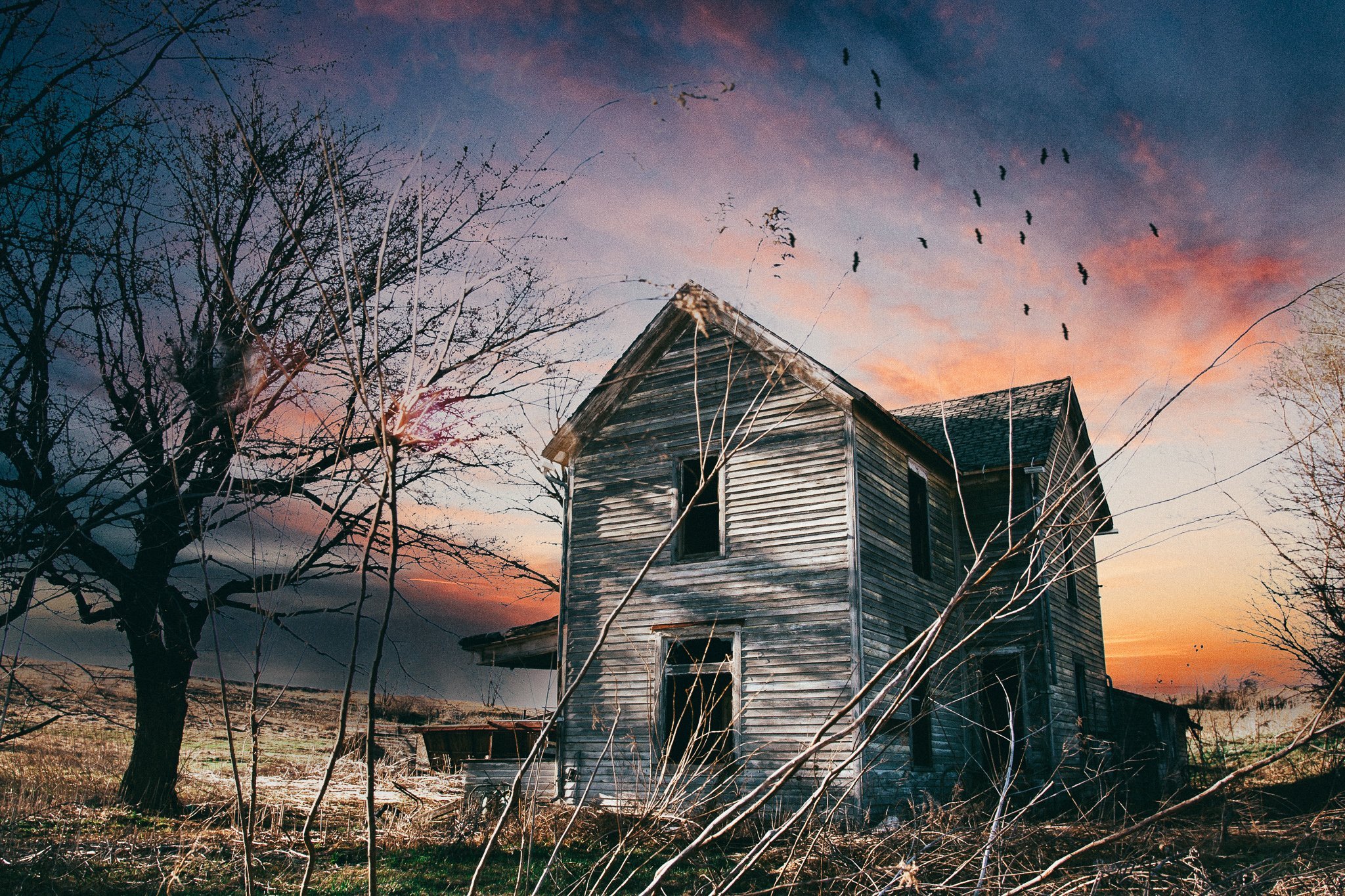 Photography is a creative act, and there are times when I’m more creative than others. Fall is one of those times and Halloween specifically fills me with a passion to produce cool things. I took the above picture many years ago when I was first starting to love finding abandoned places, but I recently re-edited the photo using Photoshop 2021’s new “Sky Replacement Tool.” I loved the edit so much it inspired me to write this short story – just for fun – because writing is also a creative act!

My car broke down on Country Rd. 31, somewhere in the middle of Nebraska. I had no cell coverage, but just around the bend in the road I saw this home, waiting for me as the sun set. It looked as abandoned as anything I’d ever seen, but I thought if I could get up the stairs to higher ground I might find cell service to call for some help.

Once inside I was greeted with decades of rot. Although many things were left as if they were probably 30 years earlier, it was obvious that storms, wind and animals had ravaged much of what I found inside. Old milk cartons. Shredded newspapers. Rusted tools and rotting furniture.

It stunk like death – an animal had probably died inside, and I just hoped I didn’t step on it as I navigated up the stairs.

It was beyond quiet here and felt like any sounds I made were magnified by a hundred no matter how careful I tried to be.

I caught myself: why was I trying to be so quiet? Why was my heart beating so fast? I’d been to a hundred abandoned houses in my adventures through the back roads of the Midwest, so why the tightness in my throat? The chills on my skin?

I found the stairs to the upper level and gingerly tested their strength. A few years ago I had almost fallen through a set of rotting stairs so I always test them out before I put my weight on them. They were sturdy, but moaned a bit in protest as I went up.

The upstairs was in no better shape than below, with the same amount of trash piling up all over. The sweet/sour smell of death was worse here and I pulled out my cell phone, hoping to get coverage.

I moved down the upstairs hallway, hoping to get service, but it didn’t help.

That’s when I heard the voice.

It was coming from below, on the first level.

I froze. My mind tried to make sense of things. Was I wrong and this place wasn’t abandoned? Had some homeless person taken it as their own? I tried to stop my breathing, my heart, any chance of me making a sound.

“Please come down here,” the voice said. It was a high-pitched voice, maybe a man’s, maybe a woman’s. It sounded as if the there was a longing inside the person – a desperation for something.

Hunger. That’s what it was – the voice sounded hungry.

Then there was a loud-sounding step. A pause – then another step.

The person was was coming up the stairs.

“I… said… come… here…” The voice said, but it had changed from a tone of desperation to one of loathing. The voice had a hint of madness in it, as if it could break open into a scream at any moment. I knew that the person meant me harm. I could feel it in my bones and in the silence between our bodies.

I was down the hallway from the top of the stairs, nowhere to hide except a small recess in the wall. If I flattened my back to it, I would be hidden from the person when they reached the top of the steps, so I shuffled back, making my body as flat as possible.

The sound of the footfalls reached the top, and I could sense the space down the hallway filling with a presence. It was the same way it feels when someone enters a room at night: you know they are there even if you can’t see them.

I closed my eyes and kept my back rigid against the wall behind me. They couldn’t see me, I knew, if I just kept my back against this wall. Maybe they’d go back downstairs and I could just wait it out and rush out of the house.

Silence. For some long seconds that felt like hours I tried to control my breathing, and just listened to the sound of nothing. I could still feel the person there, small creaks on the floor down the hall as they shifted their weight.

Then a burst of sound as my phone came to life. A phone call was coming in. I heard the steps coming closer to me but I kept my eyes closed and answered the phone, squeaking out a “help” to whoever was calling me…

The heavy steps reached me and I felt so strange, so alone, so… tired. I slept.

This barely registered, however. I could hear someone outside yelling for me. “Jerred?” It was someone I knew. They were looking for me.

But for some reason that seemed distantly curious to me, I stayed quiet.

I wanted them to come indoors.

Inside me, starting to consume me was a feeling of emptiness that was a thousand miles wide – a void that could never be filled. …

The void was hunger beyond imagining.

Thanks for reading! Some years I let my photos of the Fall season inspire me to write a fun, scary story.

I hope you enjoyed!

An Interview With Photographer Randy Edwards

How to Get Better at Photography: The Power of Setting Limits to Improve Your Skills