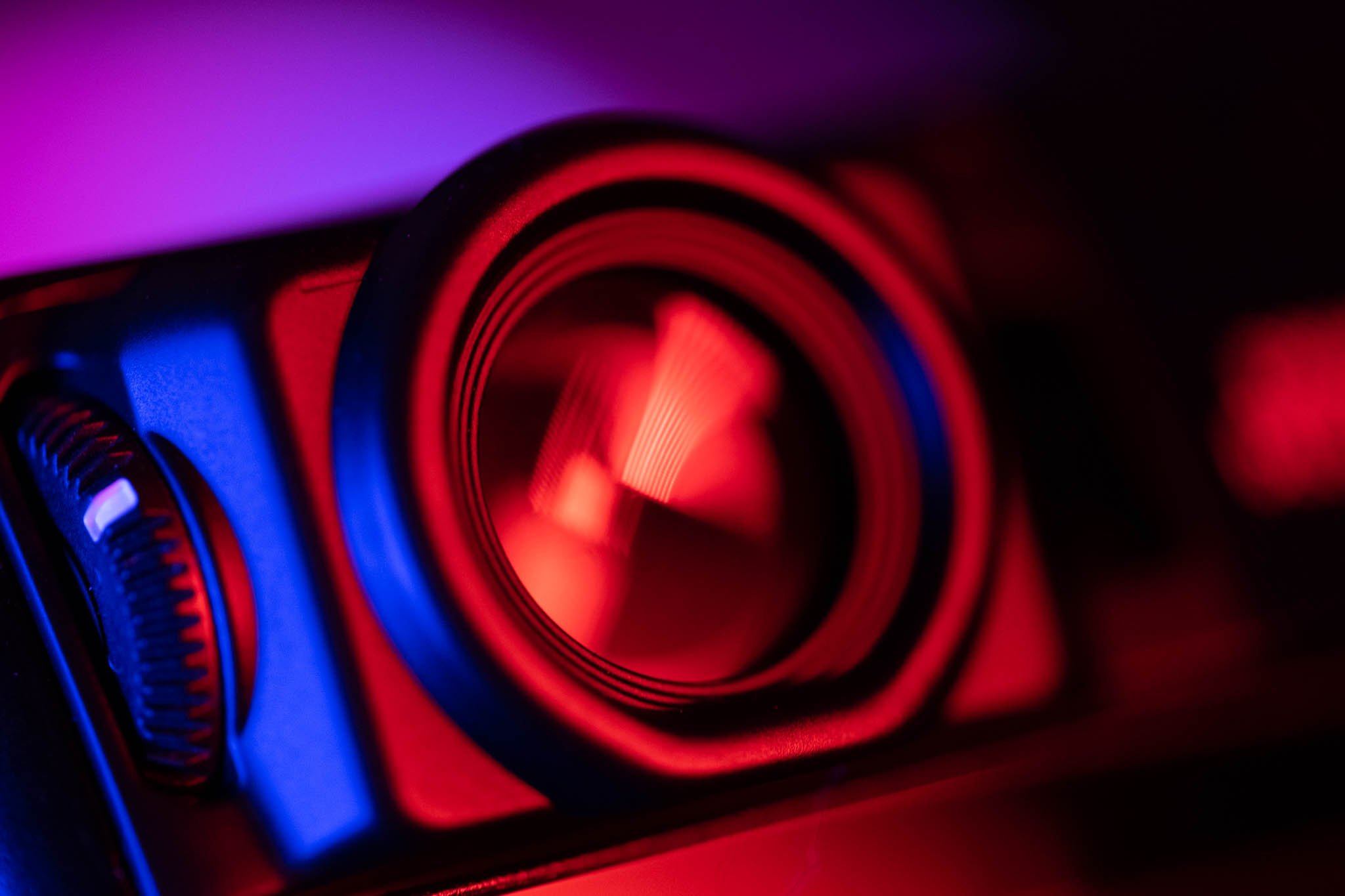 The Fuji X100V embraces and celebrates the Fuji philosophy: that cameras are more than just image makers.  More than any camera I can remember using, the X100V is simply enjoyable to use.  It’s fun.  It’s so much fun to use that even when there are other cameras around, I most often choose the X100V over what might be a more robust body or versatile lens.

I believe strongly in the well-researched idea that the more of something you do, the better you get at it.

Here is the low-down from my perspective: when you take more photographs, you get better. The X100V makes picking up a camera and shooting photos effortless, and in the hands of a capable photographer can produce stunning, world-class imagery.

Some background: I’m a Fuji guy.  I started using the system years ago after searching for something lighter and smaller than the 1D Canon monsters I was used to using.  I was a wedding photographer and the years of full-day weddings with Canon gear bursting from my various packs and cases was taking its toll on my back.  I needed something lighter even if I had to sacrifice some capability.

So I made the switch.  I was impressed enough with the image quality and lenses to make the jump even if the autofocus was a lot slower and the high ISO wasn’t as impressive.  However, I made it work, and when the XT-2 came along I no longer felt like I was missing much of anything moving away from Canon.

However, I also didn’t think I was going to purchase the X100V.  I had just purchased the X-Pro3 and didn’t think I’d ever need the X100V.  After all, I paired the X-Pro with the 23mm 1.4 and thought I had the perfect camera/lens combination that would blow the X100V out of the water.

I thought that all the way until I actually had a chance to use the X100V.  My opinion changed quickly.

First of all, the X100V is extremely easy to set up and get great shots.  I already had the batteries charged up (the batteries are the same as the X-Pro3 and X-T3) so I threw in a memory card and started snapping away.  It’s hard not to smile the first time you hear the shutter click sound (which you can change using any of three options).  The camera got from focus-to-shot so quickly I thought for sure the camera couldn’t be that accurate.  I was wrong though – the focus was very fast and accurate on all my first few dozen shots, even if I wasn’t shooting fast-moving subjects.

Within my first day using the camera, I had taken hundreds of shots of my family, of small details in my home, of every day wonderful moments.  The camera is tiny, light and gets fantastic images every time it gets picked up.  Even with the X-Pro3 sitting inches away, I would choose the X100V each and every time I wanted to shoot a fun moment with family.

And the photos are wonderful.  The quality is outstanding since the X100v shares the same sensor and processors as its big brothers, the X-Pro3 and XT-3 and XT-4.  The 100 also has a new lens (a 35mm equivalent F/2) that holds up much better than the older X100 cameras.  I had previously owned a X100s and I liked it a lot, but when I got too close things weren’t sharp enough for me.  The X100V, even when focusing close, looks fantastic and the F/2 is good enough for me.

So what’s the X100V good at?  A lot of things, actually.  As a travel camera, this is it for me.  This and a few batteries are all I need for almost any family trip.  The X100V is also imminently pocketable and unassuming.  It’s great to take anywhere that a big camera might be overly-noticed.  Street photographers seem a likely audience for me.

Since I’m mostly a landscape photographer, I wondered how much use I’d get out of it.  Turns out quite a bit, even though it doesn’t replace the X-Pro3 as my main kit.  The Fuji lineup is way smaller and lighter than what I was used to in the Canon days, but when I am serious about a photo trip, the X-Pro3 goes with several prime lenses, the 50-140 and the 100-400.  Overall that becomes quite a bit of bulk, even if the overall impact is a fraction of what it was before I switched to Fuji.

Basically, this means the Fuji goes with me WHEREVER I go.  Every photo trip, it’s there at my side, with an extremely small and light 35mm viewpoint, ready to shoot at a moment’s notice.  I even take it into gas stations and other places I wouldn’t otherwise take my camera into.  And since you never know when there might be a good opportunity for a photograph, the X100V is always there for me.

The X100V simply removes most barriers that exist for me picking up the camera. It’s light. It has a fixed lens, so no more worrying about what lenses to bring. It produces world-class images that can be printed large. So picking it up and taking photos with it is simply an easy choice. I’ve taken far more photos since I’ve had it than without it.

Still – it won’t replace most of my shooting gear.  As a landscape photographer, I just need my other lenses for situations when I want something different or I can’t get close enough.  There are shots you can’t get with the X100V, but I’m good with that.  I have to be.  It’s the compromise made with a camera this small and light.

Here’s the thing: the X100V embraces the photographer who enjoys taking pictures.  I know some photographers who really don’t care about the ergonomics or the shooting experience of a piece of kit.  They just want the camera to get the job done.

The X100V is the antithesis of this philosophy.  It’s seems designed from the ground up to be enjoyable, the evoke a feeling, and carve out an identity with enough meaning to find its way into a photographer’s life. Also: because I shoot more with it, I know it’s going to help me continue to improve as a photographer. That’s worth the price alone for me.

For the uninitiated, part of the allure of this camera and the original X-Pro is the hybrid viewfinder.  A flip of a lever switches seamlessly between a 3.69 million dot OLED electronic viewfinder and a beautiful, bright and clear optical viewfinder with some impressive heads-up display technology.

Anyone who comes from the previous age of viewfinders in the film world will probably appreciate this, but it does takes some getting used to.  First off, the camera’s HUD in optical mode can only approximate what the camera is focusing on.  The autofocus is as accurate and fast as before… but I’m never 100% sure if what I want it to focus on, it’s focused on.

Now – part of that is me not “letting go” and embracing the freedom the OVF gives me.  In all my tests taking hundreds of photos using the OVF, the focus was mostly right – I’d say something like 95% of the time.

I think it’s something that I’ll get more confident using moving forward.  For now, though, I engage with the OVF when I want to purely enjoy the act of taking photos and embracing “being” in the world in a way EVF’s just don’t allow.

I exposure bracket quite a bit now.  I never used to because I would have to use a tripod, and I hate using tripods.  The X100v, however, shoots in a burst of shots so quickly, even in locations with some wind moving trees, the shots are close enough that I can usually merge the exposures without a problem.  I love how fast the camera shoots, and the bracketing mode gives plenty of options to customize how you’d like it to bracket.

The camera is MOSTLY weather resistant out of the box.  That’s a cool thing.  Pair it with the protective filter, however for full weather resistance.  It kind of stinks that you have to buy an accessory, but at least the option exists.

I don’t do much video, but I’m pretty impressed with the easy-to-use 4K video out of this little guy.  Here is a video I put together using the X100v.  Not bad!

New to the X100v and something that caused much hand-wringing before the camera came out is the fantastic articulating screen.  It doesn’t swing horizontally, but I have used the vertical functionality hundreds of times.  It’s super useful for getting low or high.

I almost always shoot RAW with JPEG on Fuji, and part of that is I LOVE the way it uses the magic of Fuji color science to make the images look unique.  The new Classic Neg simulation mode is wonderful and the camera contains more ways to tweak jpegs than ever before, including adding grain and structure.

IMAGE GALLERY – All shots with the X100V and editing through Lightroom or Capture One.