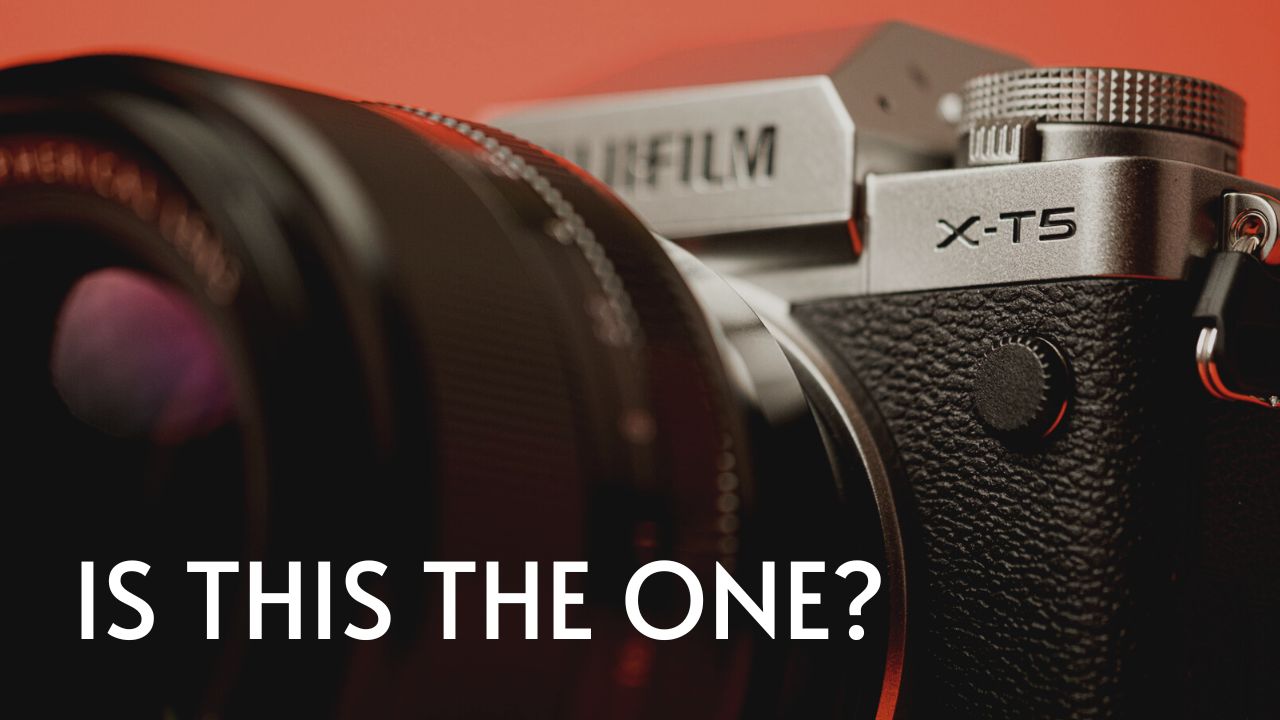 INTRO – I first got into the Fuji system with the venerable X-T1, almost eight years ago. That camera had 16 megapixels, and I STILL love many of the photos taken with it. Here we are in 2023 with a brand new camera that has all the dials that made many of us fall in love with Fuji, and a brand new X-Trans 5 sensor with 40 megapixels.

So… just how good is this newfangled XT5?

Let’s first look at the body… and YAY! The dials!

Look, for fans of the dials, you know what’s up. This is what you were waiting for!

When I’m out shooting with the X-T5, I just love the experience. I can easily change my ISO with just a few clicks, rotate the aperture on the lens, and fine-tune my shutter speed with lightning speed.

If you’re not a boomer, then you might like to use a priority mode, which Fuji has made pretty easy to use. Just throw what you want to be on automatic on the “A” setting, and the camera will take control of of that setting and your exposure. Then, you’ve got the far right dial to control your exposure with compensation. It’s all pretty easy and seamless.

Once you’re ready to take photos, The X-T5 went back to the X-T3-style Screen It goes down. It goes a little to the side. But it doesn’t flip, so no selfies!

Put your eye into the viewfinder and you get a good experience. With boost mode, which is a power-management mode Fuji puts into its cameras, we get a very fast EVF refresh rate, so the world looks great, but Fuji didn’t give us the new 5-million pixel EVF’s found in the X-H sensors, so we are stuck with a less clear version of the world.

I will say, though, I only miss it after immediately using one of my X-H cameras. Otherwise I get used to it pretty quickly, and it becomes more of a non-issue.

When I’m out taking photographs, the X-T5 is exactly what you’d expect, a modern, 2023 camera with a lot of bells and whistles.

The camera is fast and responsive, reacting immediately to my inputs. It feels good to take photos with this camera, and it provides the photographer with some confidence when you consider the IBIS helping us out in low shutter speeds, and an autofocus system that can keep up with many, if not all situations.

Speaking of the autofocus, I’m a little torn. The X-T5 inherits the same autofocus system as the X-H2, and that’s a good and bad thing.

Good, because in general use, it works great. The wide/tracking autofocus now tracks subjects well – and you can focus and recompose on static objects easily.

However, when you play back the sequence, you can see that there are more out-of-focus shots than there should be. At times, the camera can be unreliable especially when there is a scene with a lot of “stuff” to compete with the subject.

Look… that’s disappointing. It’s honestly unacceptable in 2023, which is why I think Fuji will release firmware updates to this brand-new autofocus system, so stay tuned.

Beyond the autofocus, we’ll see that the X-T5 can shoot 15 frames per second on the electronic shutter, which is pretty quick. With jpegs, you can get a lot out of this system, but as soon as you switch over to RAW, you’ll fill the buffer quickly (I got about 20 RAW files).

This might be a let-down for those wanting to use the X-T5 in situations where they might want to get a lot of continuous RAW shots.

One fun aspect of the camera is the electronic shutter – it can now go up to 180,000, which is wild! That means we can shoot outdoors, wide-open in far more situations than we have been able to in the past, without the use of an ND filter.

The 40 Megabyte files are… very nice! This is the same sensor in the X-H2, so we’re getting the same results.

Here are a few highlights with the X-H2 AND the X-T5.

My favorite lens so far is the 80mm macro – the lens seems to shine in bringing out the ability of the 40-megapixel sensor to resolve detail.

The high ISO ability is about what we’d expect from the X-T4. Maybe that’s disappointing, but we’ve got more megapixels here, so we can forgive them for that, right? And the dynamic range seems strong too.

The biggest benefit is that we have more cropping ability in the X-H2. So in this photograph of a bird, we can crop in more without losing much quality. I think for wedding and event photographers, the extra megapixels will be welcome in order to crop their photos later for tighter compositions.

So if you’re an existing Fuji user thinking of upgrading for the new sensor, I’d only do it if you were ALWAYS wanting to crop a little more, or if you weren’t satisfied with the maximum-sized prints you could make.. But if you’re happy with the quality you’re getting out of the X-Trans 4 sensors, this isn’t really as much of an impactful upgrade as you might think.

Remember – a well-exposed, bright, and low-ISO image will do well even on the 26-megapixel sensors.

And as always, a big reason we love Fuji so much though is in their film simulations. We’ve got 19 simulations, including the all-new Nostalgic Neg, which has been handed down from the GFX and X-H cameras.

Just so you know, Nostalgic Neg is really great and fits in nicely with the rest. The film simulation hearkens back to the early days of popular American film photography. More than anything else, I love the rich shadows and color that come from the shadow areas in this simulation. It’s just a beautiful way to see the world.

If you’re new to the Fuji system, I think you’ll love using these film simulations. They are kind of like using different film stocks in the old days, giving us unique ways to see and capture light in the world.

Here you can see a single photograph with multiple film simulations applied. These are just so much fun to use.

Although choosing a film simulation and going into full manual mode is a fantastic way to use the X-T5, it has most of the things you’d expect out of a modern camera, such as bracketing, Interval shooting, multiple exposures, and some more.

Fuji included Pixel Shift with this body, which allows us to shoot a series of 20 images to get a whopping 160 megapixels. This sounds GREAT – but in practice it’s pretty gimmicky. To do this, the image stabilization actually moves the sensor a bit, which means it only works in certain situations, mostly on a really heavy tripod and in the studio. In practical use the software gave me errors all the time, and the images sometimes have weird aberrations in them, especially outside, making pixel shift unusable in all but the most controlled studio situations.

One last thing: the battery life. It’s great. It uses the same batteries we’re used to in our newer Fuji cameras, and man… it lasts a long time. Fuji claims over 700 shots in economy mode, and I’m not sure what I’m getting because I don’t care – I’ve been shooting for days with one battery, and that’s good enough for me.

So – to wrap this up – The Fujifilm X-T5 is a FUN and powerful Photographer’s camera. Throwing this thing on full manual mode, choosing a film simulation, and then taking pictures is as pure of a throwback experience as you’ll get without buying yourself a film camera.

The camera looks and feels great. It takes nice photos… kind of like a lot of modern cameras in 2022-23.

The idea is why would you choose the Fuji X-t5 over some other cameras in today’s market?

In this price range, the X-T5 goes up against a range of cameras from other manufacturers, including the:

And… a lot of others, honestly.

Choosing the X-T5 over these other options comes down to how much you love the Fuji image quality, film simulations, the dials on the camera, and the lens system that’s honestly pretty fantastic with growing third-party support, and in general, I find the Fuji system to be a little more affordable than the others.

If you are already in the Fuji ecosystem, are the extra megapixels worth it? You should download a few of the RAW photos I’ve taken for this review down below to see what you think for yourself. If you are ALWAYS wanting to crop a little bit more, or print a little bigger? If not, then I don’t think you’ll find the 40 megapixels make as big of a difference as you might think.

Also remember, for only $300 more, you can buy the X-H2. Fuji has made more of an effort to differentiate the X-H and X-T lines, mostly by omitting stuff from the X-T5. You won’t get a great internal buffer, the viewfinder is lower resolution, there’s no headphone jack or full-size HDMI input, no 8k video, and there’s no battery grip.

WHY!? WHY is there no battery grip, Fuji – you are making it hard for people to give you money!

If you’re looking at the X-T5 as a photographer’s camera, most of this stuff doesn’t matter, although I do wish they would have included the higher-resolution EVF from the X-H cameras, simply because it’s a beautiful way to see the world.

Beyond this, though, I think this is the camera many Fuji fans were waiting for unless you want class-leading tracking continuous autofocus. For me, the positives outweigh the negatives, and it’s just a really solid, FANTASTIC-looking camera from Fuji.

Sometimes Art is About DOING

I Screwed Up… and I’m Okay With It!